A Gem in the Park

A Gem in the Park 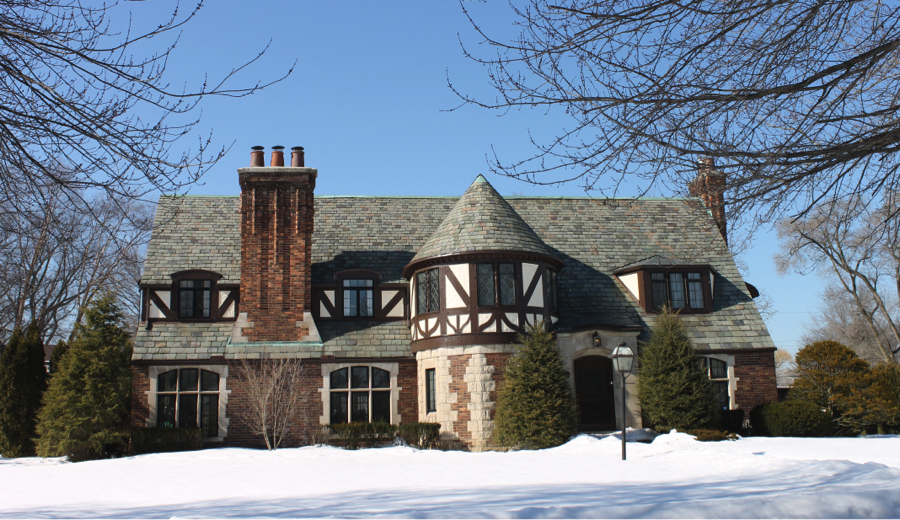 Historical significance is not the sole criterion for highlighting a Grosse Pointe Building in Heritage. There’s merit in Grosse Pointe’s younger, more typical architecture in homes of good design and pleasant façade in ordinary residences that have stood self-confidently for half a century or so that have survived the shakedown cruise, so to speak – that have proved their mettle by the tough, pragmatic test of a growing family’s use. HERITAGE spotlights a typical English Tudor home in Grosse Pointe Park, a home of rich and remarkable workmanship and classic simplicity.

“It takes a heap o ‘livin’ in a house t’make it home, “wrote poet Edgar A. Guest.

In 1938, to make a gracious English Tudor worth its salt, it took a heap o’ lumber: oak, pine, walnut, mahogany, birch, cedar; a mound of new brick; a pile of limestone, some stucco; yards and yards of wrought iron; a stack of gray-blue slate; tinted glass in assorted shades of yellow, green, amber, and blue; sheets of copper; slabs of marble; bits of tile and lead and brass a smattering of crystal; and some canvas. Oswald and Betty Zeidler’s gracious, 1938 – vintage English Tudor on Buckingham in Grosse Pointe Park was built with an abundance of all of these.

Even though they’ve only lived in the house for the second half of its existence, they’ve always felt the home was designed for them. “We are emotionally involved with this house, “ says Betty. After they purchased it in 1962 and before they moved in , the Zeidler’s spent five months restoring the house to its original design. The Zeidlers have a special affinity for wood –righ, natural, well cared for wood. They stripped paint from the two inch solid oak doors and refinished the hardwood floors with dark stain, partially covering them with oriental rugs in a variety of colors and designs.

“We never made any major interior structural changes,” says Betty. “Whoever the architect was, he did a terrific job when he planned this house, and we didn’t want to change it.” All the curves, arches, bays, the nooks and crannies, and marble sills, wood baseboard and ceiling moldings, the built-in-cedar closet, all the charming well planned details of a classic English Tudor have been meticulously preserved.

“The house flows,” Betty points out, referring to the floor plan. It’s not cut up into a bunch of small rooms. There’s a spot by the front door where you can see six different rooms at the same time.” None of the rooms is gargantuan; all are manageable size. The living room, for instance, is 27’ x 23’ and the dining room is 17’ x 16’. Yet a spacious, sunny, open feeling prevails.

“The architect was very conscious of light, “Ossie adds. “ All the windows are large. The rooms are very light, bright.”

The Zeidlers have been careful about maintaining the architectural integrity of the house. “For instance,” says Ossie,” that tree in front of the chimney. I’ll take it down this spring. It’s gotten too big and it ruins the character of the house. I’ll replace it with a smaller tree.”

The Zeidlers are considering updating their kitchen, which has walls covered with square beige ceramic tiles. “Someone suggested tearing out the tile, “Ossie says, “but we are going to keep it because it goes with the character of the house. We’ll leave the natural-colored birch cupboard doors too,” he continues. “We’ll do our updating instead with new countertops and new appliances.”

The house was built in 1938 or 1939 by Ray W. Scott, who built it for himself.. The architect is unknown. The Zeidlers have tried to find more information about the house and the builder, but haven’t been successful. “The builder was very aware of the latest building trends construction innovations,” says Ossie.   “He had foresight. He used copper plumbing, forced air heat instead of steam heat or boiler heat, and he used the finest workmen for every detail. He lived here after it was built and used the library as his office.”

A spectacular two-story tower-with a conical slate roof is adjacent to the massive oak-paneled front door. A dramatic curved stairway dominates the foyer, with a sweeping wrought iron bannister that spirals upward two stories. A large hanging chandelier of brass and stained glass drops dramatically from the second-floor ceiling to illuminate the entryway. For the past twenty-four years, the Zeidlers have placed a freshly-cut fourteen foot Christmas tree in this spot, brought down from their tree farm in Gaylord, Michigan. The upper portion of the curved stairway is bathed by the light from three pairs of tall, rectangular, leaded glass windows set with colored glass in abstract designs. Ossie Zeidler was born in the Black Forest of Germany. He came to the United States with his family when he was two years old, grew up in Detroit, and graduated from Denby High School in 1941. “I wanted to be a forester,” he says. “ My dad said, “Americans don’t care about their forests. Learn a trade.’ So I learned the tool and die business.” Zeidler Tool and Die supplied all the major auto companies in Detroit, and Ossie Zeidler became president of the National Tooling and Machining Association in 1970-71. He recently retired from the business after forty-wo years.

“But my real love was still forestry. It was always a hobby. Until recently. Now, it’s my full time business – something I care deeply about.” Zeidler owns a 440 acre tree farm near Gaylord, planted with native Michigan hardwood and softwood trees, intensively managed for timber. He also does experimental work with Michigan State University and was named Michigan’s Outstanding Tree Farmer in 1984. Not surprising, the, that the Zeidlers chose a house in which wood is an intricate part of the design and décor.

A collection of exquisite wood carvings of animals and figures from all over the world is packed two-deep, shoulder to shoulder on three wide walnut shelves in the library. He library itself is paneled in dark, polished walnut, trimmed with strips of wood molding with a small carved pineapple motif.

On the far library wall, Ossie displays one of his most precious wood carvings – one of the largest German Cuckoo Clocks in America. A gift from his uncle, the massive clock is entirely hand carved of Black Forest pine. A deer’s head, antlers, guns and rabbit are a few of the well polished carvings that comprise this ornate work of art. 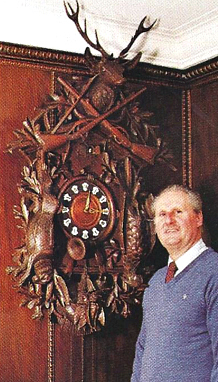 The pine – paneled basement carries out another variation of the wood theme. Two rooms are paneled in light-colored knotty pine, with a long, curved, pine paneled bar at the foot of the stairway.

There’s even a decorative wood carving of the Buckingham house itself, hanging in the breakfast room. It was made by the Zeidlers’ daughter when she was in high school.

The four fireplaces in the house are natural stone, workable and often used. “No gas logs or artificial fires, explains Ossie. Most of the light fixtures are original to the house – either tinted designs of leaded glass or ornate crystal creations that were popular in the Thirties.

The land on which the Buckingham house sits can be traced to Joseph Louis Tremble, an early French inhabitant of Grosse Pointe. Tremble officially owned the land beginning on November 21, 1808, but he claimed occupancy from July 1, 1796.   The Tremble name was spelled many ways on old documents: Tremble, Trombly, Tromble, Trembly. (Spelling accuracy was not an eighteenth p or nineteenth-century priority.) Trombly School and Trombley Road were named after this old Grosse Pointe family, and the name turns up several times on stones in St. Paul’s cemetery.

Originally the Buckingham Road land was part of private claim 379, one of Grosse Pointe’s old French ribbon farms that ran from the shores of Lake St. Clair clear back to Gratiot Avenue. The ribbon farms were so called because of their long, this boundaries, a shape unique to this area, which allowed each settler a bit of precious lakefront property.

Later, in the 1880’s, Grosse Pointe’s French farms divided and sold lakefront sections of land to wealthy Detroit businessmen, and Gross Pointe became a fashionable simmer resort are. Development of subdivisions like those on Buckingham and Trombley began during the early Twenties, continuing up until World War II. The English Tudor design of the Buckingham house was a popular choice in the Thirties.

“It’s a gran old house,” Betty adds. “We call it our Buckingham Palace.” 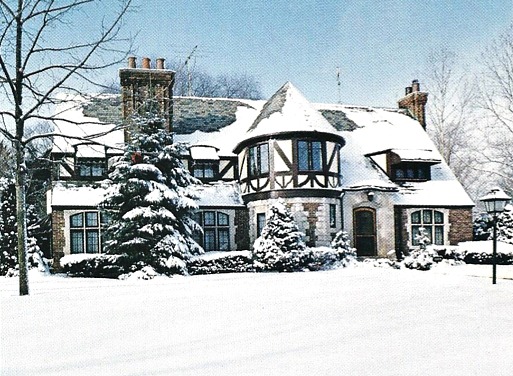 This classic English Tudor in Grosse Pointe Park is typical of homes in the area. (Photo credit: Elizabeth Carpenter)